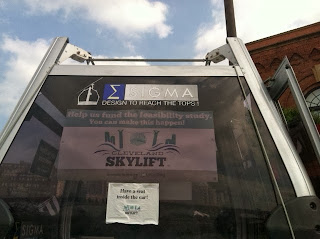 Cleveland Skylift is a concept that could become as iconic as the Terminal Tower and the Rock and Roll Hall of Fame in Cleveland.  Ski lift-type cars strung between 14 popular destinations downtown and in Ohio City, offering not just transportation, but an education and entertainment experience as well.

Jon Stahl is the driving force behind building Cleveland Skylift, and he's hoping to get the first phase financed by this spring, when proposals are due for attracting the 2016 political conventions to Cleveland.  He imagines the first Skylift being used by convention goers to get from the new Hilton Hotel at the Cleveland Convention Center to the lakefront.

In this interview, Jon explains his motivation.  He works on the lakefront, having purchased and converted the former Hornblower's Restaurant next to Burke Lakefront Airport into an office building for his software company, Lean Dog.  He envisions a floating office park, and Cleveland Skylift would be a means to get there.