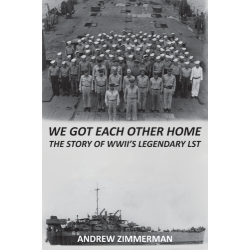 No one who sees the film "Saving Private Ryan" can forget the opening scenes of the movie, when the invasion at Normandy is depicted so graphically.  It starts with a shot inside a Landing Craft Vehicle, which drew close enough to the beach for the troops to swim to dry land...those who weren't shot in the water.  LCVs and trops were transported by LSTs...Landing Ship Tanks.

Andrew Zimmerman's grandfather served on the most highly-decorated Landing Ship Tank operated by the U. S. Coast Guard during WWII.  His book offers an in-depth examination of what one Navy historian called "the most useful all-around craft invented by the Navy."

We Got Each Other Home also explores the lives of many of the men who served on LST 66, and the duties they performed in service to our country, when our country needed them most.
Posted by Unknown at 9:43 AM