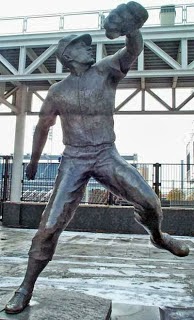 Indians outfielder Nick Swisher was nominated for the inaugural Bob Feller Act of Valor Award, presented this week during a ceremony in Washington.

Peter Fertig, a New York businessman, conceived the award to honor the military service, as well as the baseball career, or the late, great Bob Feller, the winningest pitcher in Indians history. Rapid Robert left baseball at the peak of his career to join the Navy, the day after Pearl Harbor was attacked.

The award was presented to Detroit Tigers pitcher Jason Verlander, as well as to Hall of Famer Yogi Berra, a WWII vet, and an active Navy service member.  Fertig hopes to make it an annual event.