Hear the Shocking Story Of A Navy SEAL's Father 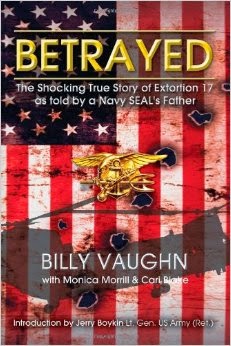 Billy Vaughn lost his son, Navy Seal Aaron Carson Vaughn when the Chinook helicopter he was in with more than two dozen other special forces troops was shot down in Afghanistan in August, 2011.
The tragedy was caused, Mr. Vaughn contends, by the Obama administration's wrong-headed policy in Afghanistan.

Billy Vaughn and his wife Karen will discuss the book Betrayed, The Shocking True Story of Extortion 17 As Told By A Navy SEAL's Father at Word of Grace Church in Chesterland on Saturday, October 18.  Their visit is sponsored by the Cleveland chapter of Act for America.